We are very lucky here at Marist College to have the opportunity to visit into New York City frequently during the year if we choose to.  There are many different options that Marist gives us with what we can do while we are there.  For only a small fee, students are able to go into the city on a coach bus and see wonderful productions such as Billy Elliot, Jersey Boys, The Radio City Christmas Show, Wicked, and Memphis.  This year I was lucky enough to attend The Radio City Christmas Spectacular and Wicked.  It was awesome to be able to spend less than two hours on a bus and be right in the city to see the show for such a cheap price! Tickets to these Broadway productions are not cheap for where we get the chance to sit. It truly is such a bargain that Marist College gives their students. Thank you, College Activities! 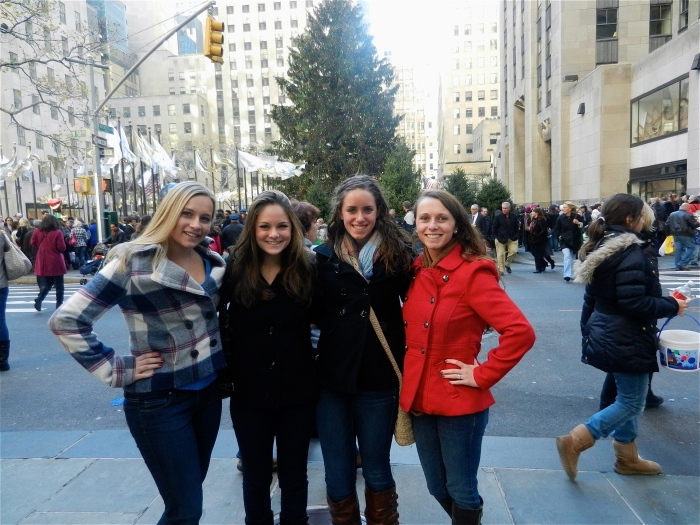 The first show that I got the opportunity to see through Marist was the Radio City Christmas Spectacular.  The bus left campus around 10 am and got into the city around noon.  This gave us five hours to walk around the city and explore for five hours before the show.  New York City is such a great place to be, especially in December around Christmas time.  My friends and I first walked down 5th Avenue and fantasized about all of the wonderful things and treasures inside the stores.  The lights on the different storefronts were spectacular.  Then we made our way over to the Christmas tree in Rockefeller Center.  I have seen the tree every year since I was a child and it truly is just as beautiful every time I see it.  All of the people ice skating, the colorful lights on the tree, the smell of roasting chestnuts and street performers on every corner- it is a feeling you cannot get anywhere else but New York City.

After seeing the tree and taking a ton of pictures, we walked over to the Stardust Diner.  None of us had ever been there before, but a lot of people had recommended it to us.  This diner was very entertaining.  The entire idea of the diner is based on waiters and waitresses singing songs (both modern and Broadway style), while they serve your food and during the meal.  We sat on the upper deck of the restaurant and on the first floor was a mini stage where the waiters and waitresses performed some of their songs.  After this we all went to see the Rockettes with the other Marist students.  It was a great show and really put us in the holiday spirit. 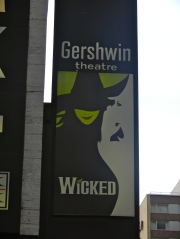 Once I heard that Marist was hosting a trip to the city to see Wicked, I was so excited! The line to get tickets was wrapped around the entire second floor of our student center (this shows how much the students really appreciate and take advantage of these great opportunities).  Wicked is a show that I have loved for years.  Even at eighteen years old my jaw still drops during every song, and I get that rush of adrenaline at the beginning of the production.  The seats we had for this show were beyond incredible.  There is no way that anyone could get orchestra seats for only twenty-five dollars anywhere else.

Being able to see Broadway shows is one of the many benefits of being a Marist College student.  I have seen many shows in my life, but I have never been able to see multiple shows with a few friends for a low price; it is a great way to spend time with friends and get a day off campus in the city.  I really am excited to attend more shows with other Marist students during this semester, and the rest of my years here at Marist College.