“Congratulations! You have been selected to attend the Goldman Sachs Federation Northeast Consortium and interview with the Technology Department for a Summer Analyst Internship.”

Let me rewind a bit here. My advisor had send me and email letting me know that Goldman Sachs was recruiting on campus at Marist by holding a small information session for selected students only. I met with Josh Matheus of Goldman Sachs, and also my advisor’s son who is a Marist graduate. He collected our resumes, told us to apply online, and check our Foxmail accounts within a week or two with Goldman’s decision.

As I read the e-mail from Goldman Sachs, I didn’t believe it. How did a sophomore who just recently switched majors get selected to interview with one of the largest financial firms in the world? Not only that, but Goldman Sachs was footing the bill for everything: travel, food, and hotel. I was amazed and excited at the same time. It’s not every day you get to call home and say you have an all-expenses paid over night interview trip with Goldman Sachs in New York City!

I realized that having only been to NYC a few times on bus trips, I had no idea how to navigate around the city. My biggest fear was that I was going to get myself lost and wind up sleeping on the side of the road. I printed out countless maps of NYC and subway paths to make sure I found my way, but I still had a feeling deep down that I’d get lost.

I arrived in Penn Station, found my way to the MTA, and surprisingly arrived in the World Trade Center district with time to spare before the afternoon information session at the Goldman Sachs Tower in Jersey City, NJ. I checked into my room on the 37th floor of the Millennium Hilton Hotel which was directly across the street from where the former Twin Towers stood. I dropped off my bags and headed for the subway to Jersey City. Even though I had no clue where I was going, I apparently looked like I did to others, as countless people asked me for directions. I guess walking around NYC in a suit makes you a local… 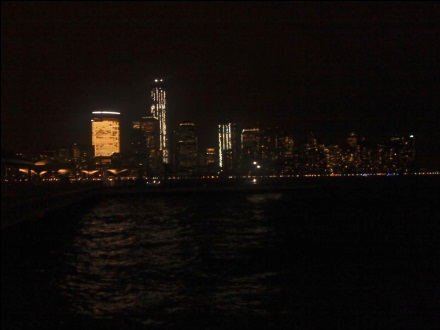 At the information session, we listened to various presenters as they told us about the company, the opportunities we had for internships, and even interview skills. We found out that of the 2,000 people who applied, only 200 were invited back for interviews, an accomplishment in itself. From there, we broke up for more presentations in our particular divisions, mine being technology. We discussed what projects the technology division worked on and the integral role they played in supporting all other divisions. I was shocked to find out that the presenter at the technology session was a Marist alum himself! We talked after his presentation about the Hancock Center and how President Murray was not around even when he went to Marist some 25 years ago.

In the morning, we reconvened at Goldman’s NYC office, and I found out that I had my interviews at the Jersey City office.  I took the ferry from NYC to NJ, and four hours and six interviews later, I was headed back to the hotel. I had felt pretty confident about how the interviews went, but didn’t go in to them expecting to be offered an internship as a sophomore, as there were Master’s students and upperclassmen applying for the same positions. I took a quick stop at the World Trade Center Memorial, and then headed back to Penn Station.

On the train ride home, I had a chance to catch my breath and process the last few days. It had been nonstop action since the moment I left, but I wouldn’t have had it any other way. The experience I gained will benefit me for years to come during interviews, but I gained more than that. I proved to myself that even in unfamiliar situations, like going into NYC alone or interviewing with a huge company, I was able to handle it. I learned a lot about myself from my experience with Goldman Sachs.