Each Spring, the coaches and rowers all travel down to Clemson, South Carolina for a training trip that concludes with a race on the last day. The buses left Marist and arrived at Clemson University 17 hours later. After checking into the hotel and getting settled, the first of 12 practices began. Each day, we launched our boats of 4 and 8 people from the beautiful on-campus beach. While I was very jealous of the Clemson students who were lounging on the sand as I carried my boat out to the docks, the practices paid off; each day I came off the water assured that both my boat and I got better.

We got to “sleep in,” as our bus to practice left at either 7:30 or 8:00 AM, compared to 6:30 practices at Marist. After breakfast, applying sunscreen and taping our blistered and calloused hands, we got to the Clemson University campus beach and were ready to spend the next few hours rowing. For the most part, the freshmen went out with Coaches Ricky Lambert and Michelle Stathers and we trained in the same boats we would eventually race in on Saturday.

Training with the same 8 rowers and coxswain was very beneficial because we all became very familiar with everyone else’s form and stroke. By the end of the week, we had spent hours and miles rowing together and our progression and success was visible.

Morning practices were typically harder than afternoon training and more work was put in during the early hours. By the time we had finished around noon, we were all hungry for lunch and were eager to eat at the Harcombe Dining Hall at Clemson University. Because we burn so many calories, our meals were larger than usual. While we didn’t want to over-eat, we had to take in enough calories to allow us to be energized for the remainder of our exhausting day; protein, carbs and water or Powerade were the basics of every meal. 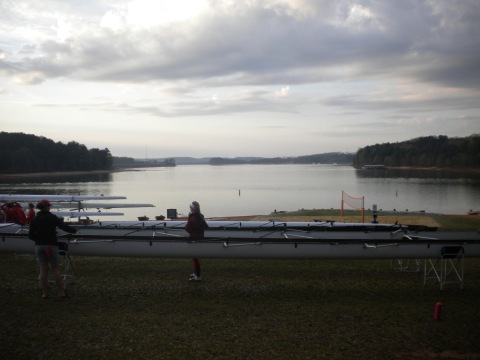 After lunch, we had a few hours to ourselves to swim at the hotel pool, walk through the cute town of Clemson, shop or nap. On most days, we opted for rest. A one to three hour nap became a saving grace before or after grueling workouts. Afternoon practice would consist of anything from practicing with Varsity to doing ten 3 minute pieces to doing a relaxing, longer row. The sun was strong in the 80 degree heat, though a few days of the week, with thunderstorms threatening, we stayed near shore and did easier workouts.

After practice, we had dinner again at Clemson’s dining hall. Besides the Marist rowers and Clemson students, we shared the cafeteria with rowers from Boston University, Syracuse University, University of Iowa, Indiana University and Purdue University. We feasted again at dinner before heading back to the hotel for the night.

Most of the time my two roommates and I were in bed by 9:30 PM, though some nights we stayed up a bit later to watch a movie or relax with our team. On one of the last nights, it’s a tradition to perform skits. The freshman, junior and seniors each came up with skits poking fun at our team and coaches; it was a bonding experience and helped us relax at the end of an exhausting week.

On our last day in South Carolina, we raced against all the schools who also trained at Clemson over the week. I was nervous because this was my first Spring race, which is 2 kilometers and a sprint, compared to longer Fall races. My boat came in 4th out of 7 teams and our time was only 2 seconds off of 2nd place.  Because we were racing against such big-name schools, we are very proud of our finish. The other Marist boats also did very well against their competition. This race showed us where we are starting for the season and we hope now to progress from there.

Once all of our boats raced, we packed up and headed back to Marist. I had mixed emotions about coming home; on one hand, I was exhausted after a very grueling week of training, but on the other hand, I felt myself and my boat getting better each day and that was satisfying.  Now that we’re back to practicing on the Hudson every day at 6:30, we have to take everything we gained in Clemson and translate that into practices and regattas up here.

My trip to Clemson, South Carolina taught me a lot about crew and rowing and I’m so grateful to have been able to go. I’m already looking forward to next year’s trip. 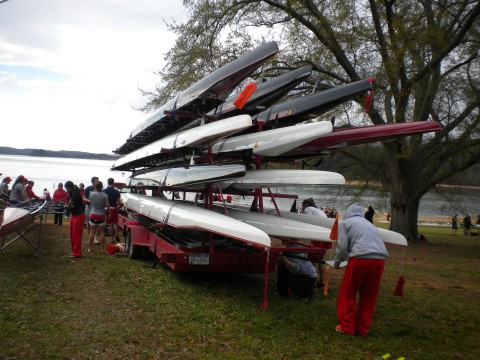