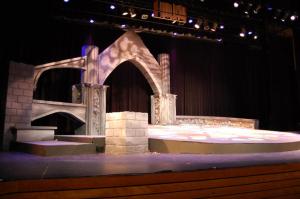 What do a band of traveling performers and the black plague have in common? They are all part of 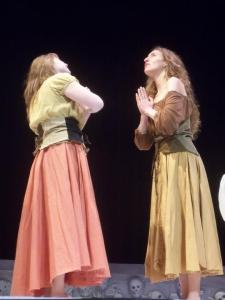 MCCTA’s fall mainstage production of Red Noses! Led by freshman Austin Christensen, as the optimistic Father Flote, a band of unlikely people join together to spread joy and laughter in a time of death and sorrow. Gracing the stage were some of the most vibrant characters that brought not only humor, but a deeper meaning to finding joy in one’s life. Leading the comedic crew was the resistant nun Sister Toulon, played by Marissa Calvanico Weinstein, followed by the dynamic duo of Rochfort and Brodin, played by Robert Peterpaul and Christos Pietris respectively, who provided a majority of over-the-top humor to the show. Next we are introduced to the naughty nun Sister Marguerite, played by the beautiful Kaitlyn Lofaro, and Sonnerie or “Mistress Bells” a part with no lines, but plenty of spunk, played by Erin Kane. There were so many talented members of this large cast and I wish I could say something about every single person! 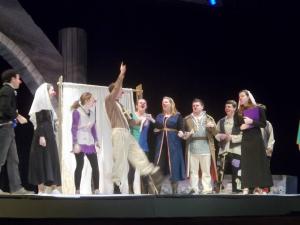 As “Over the Rainbow” began playing and the lights descended, I was met with a mix of death and comedy all intertwined. At one point Lauren Tierney, discussing how all the minor characters can get killed off without anyone batting an eye, stopped mid-sentence and fell to the ground, dead. With death I was also met with a lot of life, such as the blind juggler Le Grue, played by the fabulous Brianne Kain, and her sidekick Bembo, played by Katie Wilhelm. As the band of “Red Noseys” grew, each with their own unique talents, I felt myself begin to grow connected to this odd bunch of characters. In the final moments of the production, looking at the glowing red noses left on stage, I realized that Red Noses was more than just a comedy to entertain, but a play with a message about joy and life in the face of death. 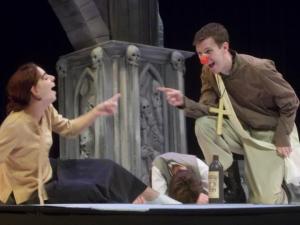 From juggling, a pie in the face, two exuberant whores, played by the gorgeous Michelle Scarr and Marcela Desemone, a rambunctious transvestite, played by Graham Harrison, to the hysterical slap-stick comedian Grez, played by Kevin Crowley, Red Noses had something for everyone! Whether it was the elaborate set, the amazing costumes, or the talented cast, once again the folks over at MCCTA pulled off another fabulous show! Be sure to go see their next production, Gypsy, you will not be sorry! 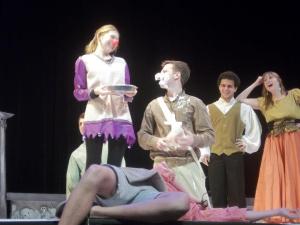