The infamous line from William Shakespeare’s Macbeth rang throughout the Nelly Goletti Theater this weekend during MCCTA’s spring main stage production. Directed by the club’s advisor Matt Andrews, and produced by Melissa Cloonan, this production had a contemporary twist to the classic tale of betrayal. Set on the streets of Chicago, the rival families became mobsters and the witches became prostitutes, to the background music of rock and roll. To round out this modern take on Shakespeare’s play was the introduction of television screens to an extraordinary set, designed by James Steinmeyer. Flashing on the screens throughout the show were comic book sketches completed by Ryan Nuzzo and Emily Hart. 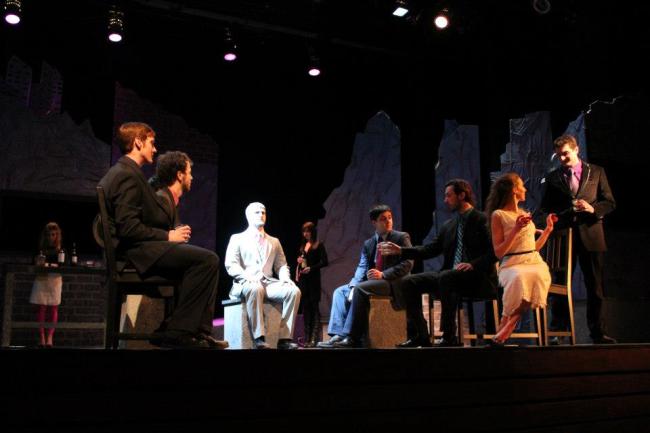 As the audience filed in, the three prostitutes took their place on the street corner, and slowly the lights of the theater went out, as fog began to creep in from offstage. Beginning with high intensity, the audience was witness to a drug transaction gone wrong and the explosive fight scene that ensued guaranteed that this production was not merely a classic telling of Shakespeare, but a fantastic, on the edge of your seat, production. Speaking the classic Shakespeare lines, but delivering a very modern performance, the highlight of the show was the performances of some of the seniors including Ryan Zaccaro as Duncan, Robert Peterpaul as Macduff and the stunning Marcela Desmone as Lady Macbeth. Also to be noted was the performance of the two leading men Mathew Saulnier as Banquo and last but not least, the star of the show, Daniel Roberts playing Macbeth.

Packing the house every night, this modern version of Macbeth got college students to fill the seats and experience Shakespeare in a whole new way. I cannot wait until MCCTA’s next show, Treasure Island, the spring Children’s Theater Production!