The week of October 27th through 31st was Graduate School Week at Marist College. Although I’m just a sophomore, I was an active participant in the Grad Week festivities. I figured, “Why not? I’ll get a head-start on planning out my life!” (Cue the Jaws music).

Here’s a quick round-up of what went on this week:

On Monday evening, October 27,  there was a keynote address by Associate Professor of Religious Studies, Dr. John Knight, during which he explored the history, culture, and expectations of graduate study. 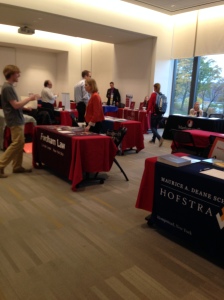 tion, and Law. Lastly, on Thursday the fairs emphasized programs in Science and Mathematics.

Additionally, on Wednesday October 29th, during activity hour (11am-2pm, no classes), a panel of representatives from Columbia University discussed the graduate school application process, graduate school culture, and the achievements of Columbia’s graduate 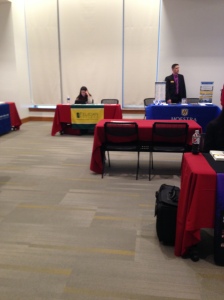 As an English major, I attended Wednesday’s grad fair in hopes to peruse the schools in attendance. Law schools held a prominent presence, featuring schools such as Hofstra University and St. John’s University. In a close second for the most tables were the schools focusing on Education and Social Work, such as Manhattanville College – School of Education and New York University – Silver School of Social Work.

Regardless of your field of study, Marist’s Graduate School Week covered it all, giving Red Foxes the knowledge and resources to pursue their dreams.

Learn more about the Center for Career Services here.