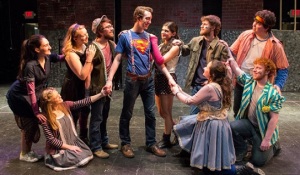 ncrease in facial hair on the Marist Campus can mean one of two things: either it’s “No Shave November” (which it is not, because it is February) or Godspell is in town! The weekend of February 26th-March 1st, the Marist Theatre Program and the Marist College Club of Theatre Arts (MCCTA) presents Godspell, a musical about trust, acceptance, and community on the Nelly Golleti stage. Where else could you see your favorite Resident Assistant, Eddy Lee, portray Jesus Christ? With the talent in the MCCTA crew this year, this production is sure to be fantastic.

Godspell is centered around parables primarily from the Gospel of Matthew. The parables are told through modern musical numbers such as, “Day by Day” and “Beautiful City.” Recently, the cast of Godspell came together to share what Godspell means to them. Check out the video here.

I sat down with cast-member, Mena Buscetto, to discuss her role in the play and her view of production so far.

Godspell is the most incredible show I have been a part of. The ten cast members, including myself, our director, musical director and crew have worked tirelessly on this show for the last four weeks and we could not be more excited to perform for an audience. The music is unbelievable, the story is powerful and overall the production is so much fun. It has been a lot of hard work and a big challenge but I can speak for the entire cast when I say that we are proud of ourselves. We believe in this show so much, but more importantly we believe in each other which is what Godspell is all about!

Another interesting note, the February 28th matinee will be an American Sign Language Interpreted Performance. 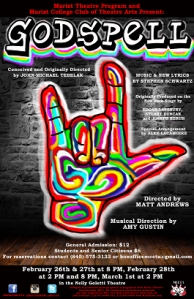 $6 for students and seniors and $12 for general admission.