Marist Theatre Program and the Marist College Club for Theatre Arts (MCCTA) presented, Godspell, the weekend of February 26th to March 1st. Godspell depicts Jesus’ most famous parables through skits and musical numbers such as “Day by Day” and “Beautiful City.” Marist’s production showcased the talents of ten actors, who did not leave the stage for the entirety of the play. The show conveyed its message through the brilliant quality of acting, directing, and technical elements while it entertained the audience with humor and dazzling musical numbers.

The actors in Godspell did a fantastic job of personifying Jesus Christ and his disciples, while putting their own twist on an ancient concept. From the enthusiasm of their singing to the tears streaming down their faces, the actors were clearly invested in their characters and the story they were telling. The actors’ interaction with the audience throughout the play thrust the audience into the lives of the characters. This gave the audience a personal connection with the characters because they were able to encounter them up close. It is interesting to note that during intermission, during which the actors usually leave the stage, the audience was invited onto the stage for punch and cookies.

It was impossible not to love sophomore Eddy Lee’s portrayal of Jesus Christ. Lee is not only a talented actor, but a singer and dancer too. Initially, I was intrigued by the character because he stood on the stage, with his back facing the audience, and did not move for ten minutes before the show started. Lee’s clown-like costume and Superman shirt added to the charming and lovable aspects of his character. The audience most likely did not expect to see a play about the Bible set in an abandoned warehouse. Perhaps they were even skeptical beforehand that the scenery would not support the show. However, the play consists of the characters acting out skits of bible stories, therefore their access to props in the set design made sense and held the story together. For example, the contemporary humor and pop-culture references intertwined with biblical language grabbed the viewer’s attention and kept their interest throughout the show. In the midst of Jesus explaining the greatest commandment, the viewer is not expecting a Mean Girls, Hunger Games, or Friends reference. Furthermore, the humorous acting, relatable references, engaging music, and interesting allusions combined to form an entertaining and successful production of Godspell. 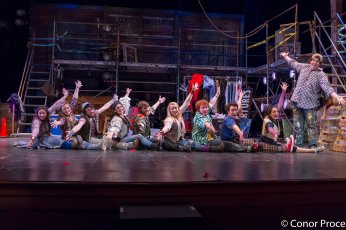 Behind the Scenes: In preparation for the show, the actors each contributed at least eight hours of work in the workshop backstage building the pieces of the set such as the platforms they stood on and Jesus’ cross. The stage crew including the stage manager and props team was comprised entirely of students.

One thought on “Godspell Casts a Spell on Marist Audience”