From the moment I stepped onto the campus of Marist College, I knew that it was exactly where I belonged. Not only was I impressed by its gorgeous surroundings, but I felt as though I was right at home. I don’t know how I knew it in the beginning that this was the school for me, but everything about it felt right. I left that first visit knowing in my head that this is where I wanted to spend the next four years of my life. I was so sure that this is where I’d end up, my parents and I even purchased 3 sweatshirts with “MARIST” written across the front.

Though I didn’t see myself anywhere else, I did what every other high school senior does when applying to school. I had to keep my options open, so I applied to five other schools. Since Marist was the first school I visited, I constantly found myself comparing everything about the other schools to Marist. On the tours at other colleges, I felt nothing but pure disappointment.

I found myself making excuses why I didn’t want to be at each of the other schools I visited. I even told my mom I couldn’t go to one school in particular because the chairs in the library just didn’t look comfortable enough. I mean, come on.

More realistic comparisons included the convenient location, the breathtaking view, and the small class sizes. The miraculous dining hall, SUSHI, the buildings, SUSHI… the fabulous internship opportunities, the close connections to New York City, and did I mention there is sushi in the dining hall?

Nothing could compare to the college of my dreams, and my heart was set.

I applied Early Action, and patiently waited for my letter. I checked the Marist Twitter feed religiously, waiting for updates on when the letters were being sent out. As late January approached, I checked the mailbox every single day. Nothing.

I began to see people post their acceptances on twitter. That’s when the stalking began. Yup. You read that right: stalking. That mailman didn’t know what he got into signing up for the route in my neighborhood. My mom was out there, I was out there, my sister even began stalking him looking for my letter.

On January 31st, I received my letter. As I held the thin, skinny envelope I just knew it was a bad omen. 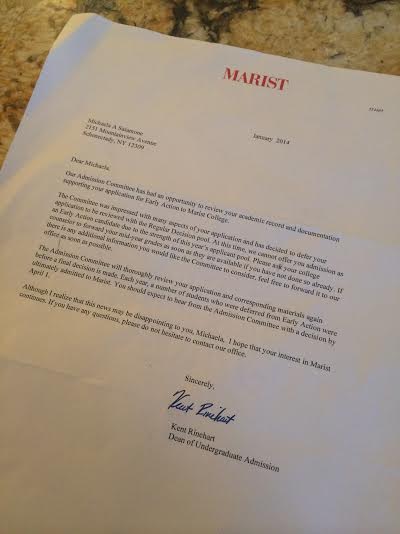 I felt my heart shatter into a million tiny pieces as I read the words printed on the single sheet of paper. It wasn’t a no, but it wasn’t what I wanted. I was heartbroken – I felt so stupid for putting all my eggs in one basket and getting my hopes up. Now I had to wait two more months, and that was if I ended up actually getting in. I even gave my Marist sweatshirt to my friend because I was so distraught. “You can have this,” I told her. “I won’t be needing it.”

My family was so supportive, and constantly reassured me that I still had a chance. I sent in my mid-year grades, along with a couple other recommendations from my teachers. I was determined. I called the admissions office a few times to check in, trying my hardest to be “pleasantly persistent.” I scheduled another visit, and set up a meeting with an admissions advisor. He told me that he was very impressed with my transcript, but would not give me an answer. I had a very positive experience when talking with the advisor, and I felt really good about the meeting.

So we bought some hats. 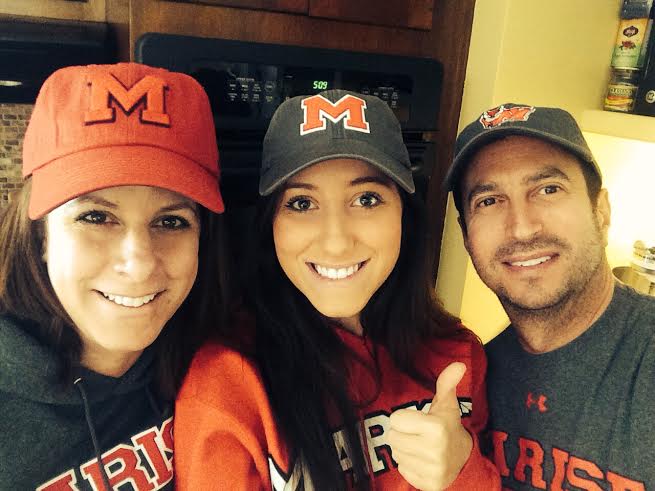 As the third quarter of senior year began, the stress of waiting, combined with my tough curriculum, began to get to me.

Should I apply to more colleges?

Should I revisit some of the ones I discounted earlier?

Over the next few weeks, I just tried to plug away at my school work. I knew that the admissions office already had everything they needed to make their final decision and all I could do was hope for the best.

On March 19th, a post that popped up on my twitter feed caught my eye. “Attn HS students – Decision letters are being mailed this week. Some were dropped off to USPS yesterday. The rest will be out by Friday.” My stomach dropped when reading this. I knew that in just a couple days my future would be known. 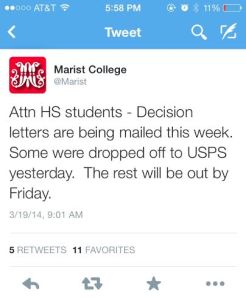 Since the mail to my house comes at a different time each day, it was hard to know when to exactly to check the mailbox. One day after school, I pulled into my driveway and saw the mailman across the street at my neighbor’s house. I didn’t want to be a creep and go up to his truck…I think we tortured him enough only a few months prior. Instead, I waited in my car in the driveway until he started towards my house. I got out of my car to get the mail, but all he had for me was magazines and bills for my parents.

The next day, I decided to take a different approach. Time to be more aggressive. I drove around the neighborhood searching for that little mail truck. I was so eager to get my letter that I just couldn’t wait any longer. You may think of it as creepy, but I call it “professional crazed fan.” GO RED FOXES! Anyway, I found the truck and parked behind it. I built up the courage and I walked up to the window bashfully asking him if he had anything for my house (again). He looked in a pile of letters, and once again handed me absolutely nothing that I was looking for. He finally looked at me and asked with a smile, “What are you waiting for, anyway?”

“An acceptance letter, hopefully!” I replied.

He light-heartedly wished me luck and I stood there empty handed as he drove away. The next morning I had heard around school that a few seniors had heard back from Marist already. I was anxious that entire day, and I couldn’t wait to go home to find the mailman. Deciding to leave school a little early that day—sorry, Mom—I drove around my neighborhood in search of the mailman. When I finally saw him parked just a street over from my house, my heart raced.

Today was the day.

I peered into the window of his truck and to my surprise the mailman was not in his truck. I knew he had to be down the street delivering more mail, so I sat in my car and waited for him to come back. I waited for a long time. After awhile, I saw the mailman walking up the street delivering mail to all the houses. As he got closer, I inched my car closer and closer to his truck. As he approached, I slowly got out of my car to be sure not to scare him.

Coincidentally my mom happened to be driving by, coming home from work. She decided to look for the letter with me. Together, we stood behind the mail truck as he rummaged through his pile of letters for my street. He picked up a pile of mail for my house and searched through it.

My heart sank. The mailman stopped and said “Let me check one more spot.” He pulled out a pile, this time of large envelopes and magazines that were also for my house. As he looked through the pile, I saw out of the corner of my eye a big envelope with red letters on the front.

I grabbed the letter out of the mailman’s hands, tore it open and saw in huge letters “YES” on the front of the big red folder. I threw the acceptance letter up into the air and jumped (yes, jumped) ONTO the mailman hugging him and sobbing and thanking him. He seemed very alarmed but I did not care. “This is the most exciting thing that’s ever happened to me at work!” he said. 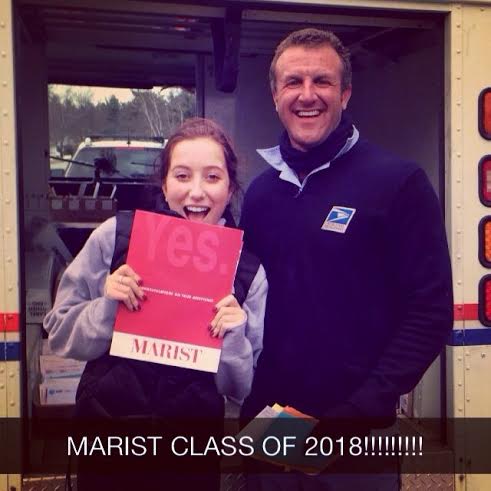 I sat on the ground and cried tears of joy. The mailman probably thinks I’m very emotional, but that’s okay. I had never been so happy in my life. My dream was finally becoming a reality. I now know that hard work truly pays off in the end, no matter what obstacles you need to overcome to get there. Things may not work out exactly how you pictured them in your head, but what’s meant to be will always find its way.

Oh, and always thank your mailman.