The weekend of October 24th and 25th in the Nelly Goletti Theater, Marist Singers held their annual Night on Broadway event to raise money for Broadway Cares/Equity Fight AIDS. This year, Marist Singers raised thousands of dollars through ticket sales, raffles, and a bake sale throughout three shows. The show contained members of the Marist Singers program performing songs strictly from Broadway musicals. Sarah Williams, Assistant Director of the Music Program/Senior Lecturer of Music here at Marist, directed the show, but for the first time brought on a student director. That role went to Mike Parisi, who, along with having a solo performance and taking part in a few group numbers, helped to create a very successful show.

There’s often a true sense of community when it comes to the participants in the Singers program, but a lot of the students enjoy this show, because everyone come together to raise money for a cause way beyond themselves. The President of Marist Singers, Jenna Bellofiore, was a huge part in the success of the show, and she uses the terms “astounding” and “wonderful” to describe her experience working on the show with Marist Singers.

“We all came together and worked as one towards an honorable goal. And in my opinion, there is nothing more powerful than that. They lifted each other up in our craft of music and through that we lifted many more up who are suffering with HIV/AIDS. Donating our time and efforts to Broadway Cares/ Equity Fights AIDS was incredibly rewarding to each and every one of the singers. I could not be more honored to be the president of such a giving group,” Bellofiore says. 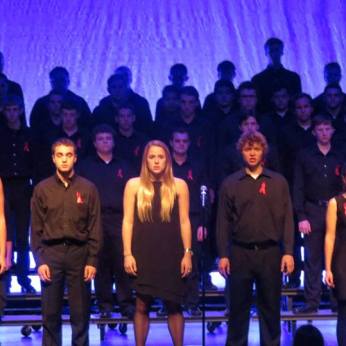 Sophomore, Hayley Critchfield, describes Night on Broadway from a performers point of view. Critchfield says, “I think it is great that the Marist Singers program is able to come together and make a show that can make people laugh and cry and something that that they can even sing along to. We’re able to raise money for a great cause while highlighting the talent of individuals singers as well.”

Popular songs such as “What is This Feeling” from Wicked (performed by Alexa Abrams and Claudia Lent), “Baptize Me” (Steven LaMaita and Rachel Tyson) and “Hello” (Time Check) from the popular play The Book of Mormon, and “Don’t Rain on my Parade” (Shannon Rafferty) from Funny Girl. The Freshman Women’s Choir started out the show with “There’s No Business Like Show Business” from Annie Get Your Gun and joined the Upperclassmen Singers, after their rendition of a medley of song from Sweeney Todd, for “Time Warp” from Rocky Horror Picture Show. In the first act, the Men split from the women to sing “Make Them Hear You” from Ragtime. Then, in the second act, Women sang “Summertime” from Porgy and Bess.

The show was a success with three standing ovations from the audience. Those who attended the show described it as “thrilling” with “continuous laughs and excitement.”

The entire weekend the performers weren’t thinking about themselves, but how they could raise the money towards a cause to fight a disease that takes so many lives each year. Brian Graff, Vice President of Singers, describes their contribution by saying, “Events like Night on Broadway help remind us what the bigger picture is. We don’t just sing for ourselves, we perform and share our gifts for the community for a cause greater than ourselves.”