Someone from the back of the room raised their hand and said, “So I have two questions! First, how soft are the dogs?” and it sent the room into a fit of laughter. Although everyone was there to hear about the experiences of working with Social Media as a profession, there was a larger question on the audience’s mind: what was it like working with the First Lady in the White House?

Kelsey Donohue was a regular Marist student, just like the audience for her talk “Storytelling with Snapchat: Lessons from Michelle Obama’s Digital Strategy” that took place last Monday in the Lowell Thomas screening room. Kelsey worked closely with the Admissions office as a Tour Guide and Ambassador during her time at Marist. She had an internship at the Department of Education that introduced her to the government world. Then, she graduated in 2013 setting her sights on education and digital media. She worked different jobs and networked her way through Washington D.C. until one day her resume landed on a desk at the White House. 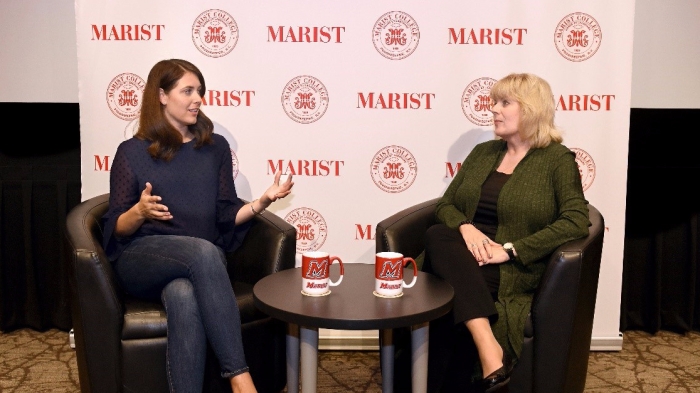 Kelsey worked under Michelle Obama helping get the Obama administrations message and agenda to reach young people. Kelsey helped write press releases and had a big hand in the social media engagement with the public. One big project she was involved in was helping set up Michelle Obama’s snapchat. She explained how their goal was to peel back the curtain of the White House and show that it was truly the people’s house. Snapchat turned out to be the perfect platform to get this task done. Kelsey and her four-person team were able to showcase everything from official business, like prepping State House dinners, to casual scenes of Michelle Obama walking the dogs. They had the opportunity to collaborate with people like Ellen, James Corden, and even had a mention on an episode of Gilmore Girls.

The snapchat account was helpful for showing people the inside of the White House, but also for spreading the Obama administration’s initiatives. The team highlighted many events involving Michelle Obama’s “Let’s Move” Program and even showed her cooking from the food grown in the White House garden. They also highlighted the importance of education and let visiting students do Snapchat takeovers. The Snapchat also went beyond the White House, like when they followed Michelle Obama’s trip to Liberia to promote education among young girls. 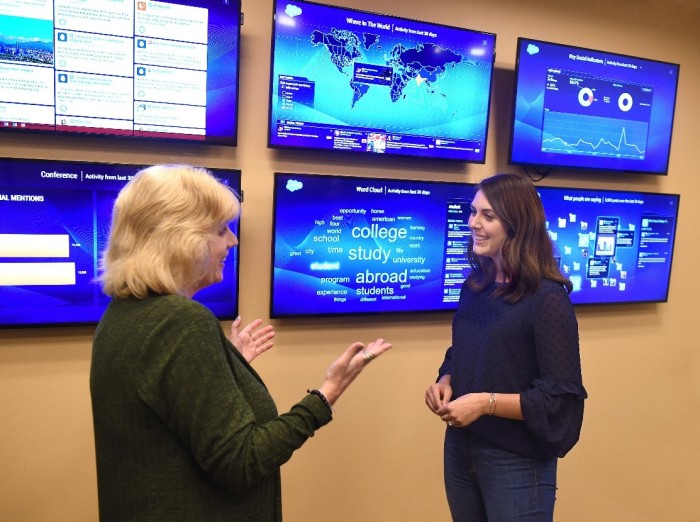 Kelsey and Professor Donohue chatting in the Center for Social Media

Kelsey described her experience, answered questions, and gave advice to her fellow Red Foxes. She emphasized the importance of making connections and reaching out. “Don’t be afraid to cold e-mail people,” she said. She recalled how she would e-mail people in positions she wanted and ask for advice. She also mentioned the importance of staying connected in the Marist community. She explained how she loved being able to come back to Marist and give back any advice she could to current students because she remembers how intimidating being a senior can be.

The talk wrapped up with a round of applause and some comforted seniors. And Kelsey did confirm: yes, Bo and Sunny are very soft.