Marist College has joined the American Talent Initiative (ATI) in an effort to work with other colleges and universities to expand opportunities for higher education. Just 4% of students from lower-income families access the colleges and universities with the best graduation rates. That’s why ATI’s goal is to graduate an additional 50,000 lower-income, higher-achieving students in 270 different colleges and universities by 2025. Marist is proud to be a part of the American Talent Initiative, we believe every talented student – regardless of income – should have their shot at achieving the American Dream. To help inspire future high school graduates to attend college, Marist has chosen to highlight Allen Gavilanes, a first generation college student and freshman Division I student athlete. 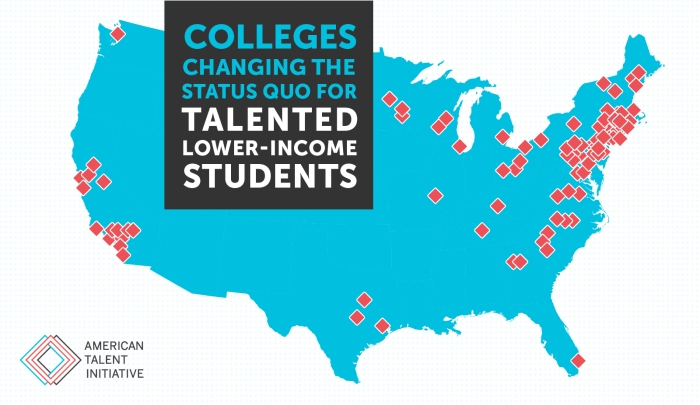 Marist is home to many first generation college students much like Allen Gavilanes. Allen Gavilanes is a freshman from North Plainfield, New Jersey who plays on the Men’s Soccer team.

Gavilanes explains his transition from high school soccer to collegiate soccer saying, “At first I was very nervous playing, but my teammates definitely helped me out on the field and off the field. They made me feel very comfortable.” 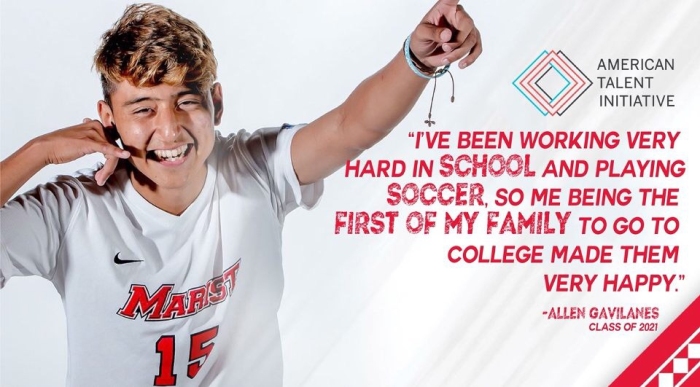 Head coach of Men’s Soccer Matt Viggiano explains seeing Gavilanes at open house, “He might have had twelve to fifteen family members here. You could see how much pride the family had in him making it here.”

Gavilanes went on to explain how proud his family is of him for being a first generation college student in their family, “I’ve been working very hard in school and playing soccer, so me being the first one is a good experience for them as well. Me being the first to go to college made them very happy.”

Gavilanes’ hard work paid off, as he has been named the MAAC Men’s Soccer Rookie and Offensive Player of the Year for the 2017 season. The accolades mark the first two major awards of Gavilanes’ career and marks the first time since 2003 that the same player was named Offensive Player of the Year and Rookie of the Year in the same season. In addition to winning the two major awards, he was also a unanimous selection to the All-MAAC First Team and All-MAAC Rookie Team, the only unanimous selection on the First Team and one of only two unanimous selections on the All-Rookie Team. He showed his gratitude to his family, “I like to just thank my family, my friends from back home, my teammates, they have always encouraged me to put in my best on and off the field, so I am grateful for having them in my life.”

Viggiano spoke about Gavilanes future potential saying, “I think he has only scratched the surface. He can obviously get better and as a whole our team will get better because of it. We are looking forward to his bright future.”